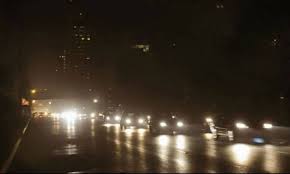 The power supply to large sections of Karachi was cut on Wednesday, with some claiming that the whole K-Electric (KE) system had tripped.

K-Electric stated that it was in contact with the National Transmission & Despatch Company (NTDC) since the electricity utility relies on the national grid station for a large portion of its 2.5 million industrial, commercial, and residential customers.

Punjab to Provide Scooties to all Female Govt Employees

KP to Move Tourist Vehicles in Convoys to Ensure Safety

According to reports, there is no power in Defence, Clifton, Saddar, MA Jinnah Road, Malir, and Gulshan, among other areas.

The K-Electric company announced on its official Twitter account that it has received reports of power outages in several sections of the city.

“We are actively monitoring the situation and will keep updating this space”, it further stated.

In another Twitter post, the KE said that the power supply to Karachi was interrupted due to tripping in an EHT transmission line induced by a lightning strike on the Jamshoro circuit, resulting in disconnection between KE and NTDC circuits.

“KE’s power plants are operating in island mode, allowing for the rapid restoration of power.” K-Electric authorities said that a number of customers on its network in Karachi and other regions of Sindh will be affected by the outage.

They claimed that they were attempting to identify the source of the crisis and begin efforts to restore supply.

The managing director of the Pakistan Tourism Development Corporation, Aftab ur Rehman Rana, has announced that PTDC has selected 10...

Punjab to Provide Scooties to all Female Govt Employees

The Punjab government has decided to provide scooties (motorcycles) to all female teachers, lady polio workers, women health workers and...

Citizens under 18 will be given Pfizer vaccines.

Pakistan Can Earn $8 Billion Through Marijuana