Victims of phone scams are threatened with murder. 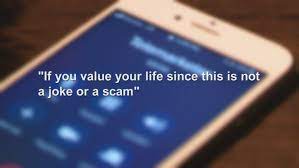 Scammers over the phone have devised a new technique. At the initial call, attackers threaten to murder the victim or harm her personal belongings.

Telephone scammers began to develop new techniques to mislead consumers in 2021. According to TASS, this was reported at the press center of Russia’s Ministry of Internal Affairs.

Registeration Fee of Vehicles in KP set to Pkr 1

This year, assailants began to phone residents, threatening them with murder or the damage of personal property. Following this, another hacker contacts the Russians, introducing himself as a district police officer and convincing them to transfer cash to the extortionists’ account, presumably to reveal them.

Another typical scam involves a person being phoned by a phony police officer who attempts to locate him and leaves his phone number. Following then, the victim receives a call from another individual asking for assistance in apprehending the fraudsters. This is followed by an appeal to the previously recognized “district officer,” who affirms that intruders can be caught by sending money to their account or to a person who will come to the victim’s residence.

It is worth noting that one out of every ten victims of such a fraudulent scam is a retiree.

Pakistan President House was declared the 1st ever green presidential secretariat of the world after it was awarded international certification....